American visual artist Man Ray (born Emmanuel Radnitzky, sometimes spelled Rudnitsky, 1890–1976), was a leading figure of the Dada art movement, and later of Surrealism, in both New York and Paris. He worked in several media exploring the concept of the ‘found object’ – treating discarded materials as valued artifacts. Many of these objects recur over many years in a range of the artist’s work.

The motif of the unwinding swath of paper first appeared in Man Ray’s controversial Dada sculpture of 1919, Lampshade, in which an unrolled paper lampshade curled around a metal shaft (see below). He returned to the spiral motif in a few subsequent works, three of which are titled Return to Reason (or Retour à la Raison): a 1921 painting, a short film made in 1923, and a larger version of the painting, executed in 1939.

This photograph was published in Spanish / French literary magazine 391, nº 13, July 1920, beside, among others, the following text (English translation underneath):

Knowledge and morality aren’t but flypaper, I advise flies to live in confessionals, for sins are much more pleasant nourishment than shit.*

Works by Man Ray and other visual artists in the temporary exhibition Paris-New York, 1908-1968 at the Centre Pompidou, Paris, 1977. Man Ray’s lampshade can be seen hanging from the ceiling near the centre of the photo.

A pair of 18K yellow gold spiral ear pendants, titled Pendants Pending, designed by Man Ray, and created by goldsmith GianCarlo Montebello in 1970. This pair was auctioned by Parisian auction house Artcurial in 2014. Estimated at € 18,000 to € 20,000, the earrings ultimately fetched € 57,600.

Jewellery designed by artists bears touching testament to an encounter between two styles – that of the artist, and that of the goldsmith.*

Around 1968 Man Ray had already made a pair of these earrings, which became famous after French actress Catherine Deneuve wore them in a series of portraits shot by Man Ray (see below). The earrings were only taken into production in 1970 with the help of Milanese goldsmith and jewellery designer GianCarlo Montebello.

Because of the pendants’ weight, a special mechanism was created that allows them to be placed around the ears instead of hung from the earlobe as traditional earrings.

Catherine Deneuve wearing the gold spiral ear pendants. This photo by Man Ray appeared on the cover of the June 16th, 1968 issue of The Sunday Times Magazine (UK) with the subtitle ‘The Mysterious Art of Catherine Deneuve.’

Deneuve is surrounded by objects made by Man Ray, including a painted room screen, a paper spiral mobile, the gold earrings echoing the spiral motif, a chessboard table, six carpenter’s planes, and a jewellery box disguised as a book with the title Lèvres d’Or (‘Lips of Gold’).

Man Ray made this short movie, one of the first Dadaïst films, by placing objects over pieces of film inside a darkroom and then turning the lights on to print the shadows of the objects onto the film.

The short film contained no audio track originally; the soundscape heard in the video below was added by the person who uploaded it to YouTube in 2015. So if you want a totally authentic viewing experience, you’ll have to mute the sound. 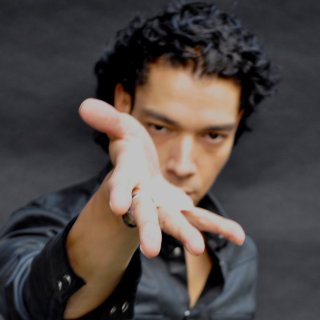